4,000 workers have a field day at Dubai’s Bollywood Parks 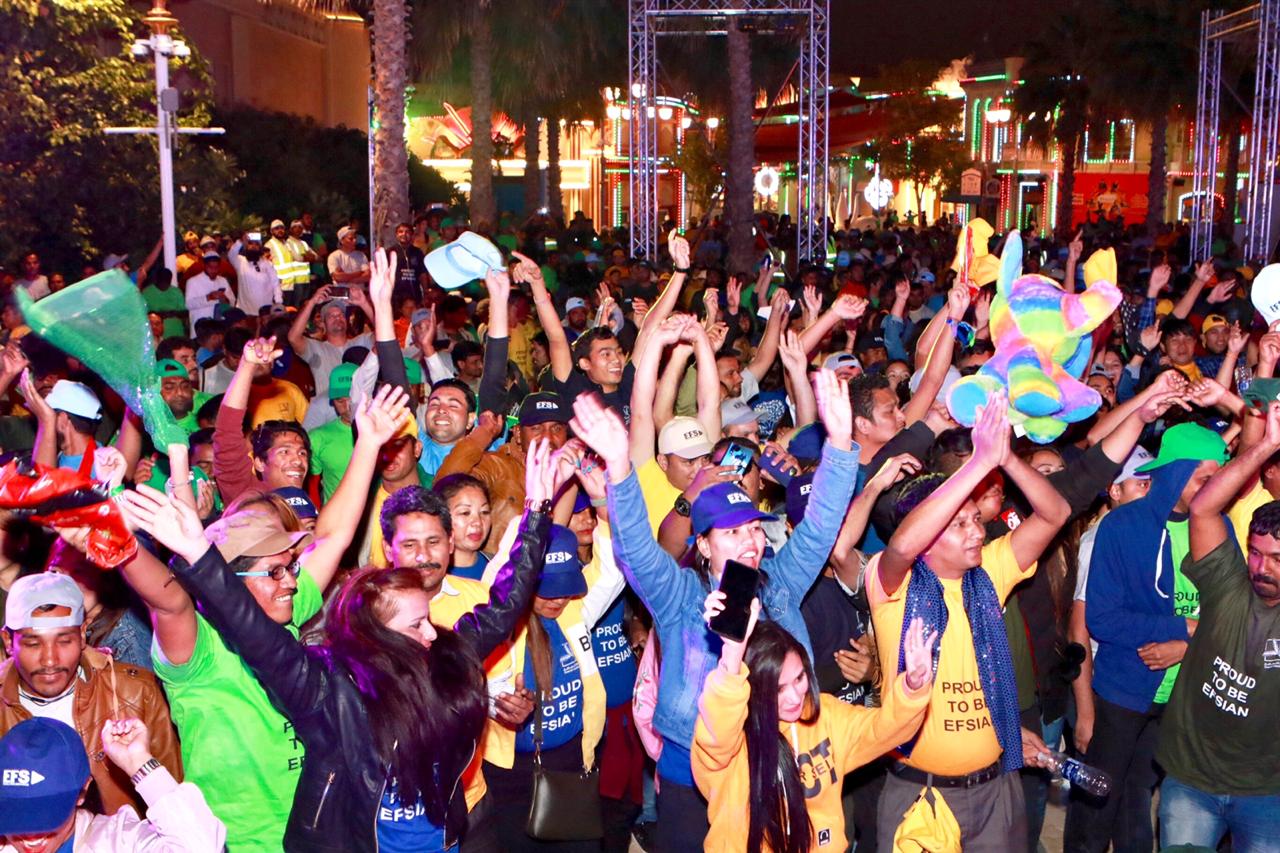 Jalaluddin Mulla has been married seven years, but the Bangladeshi expat, who has worked up the ranks from cleaner to housekeeping supervisor, never imagined he would be able to bring his wife on an all-expenses paid trip to the UAE.

On Friday however he was proudly showing his wife Halima around Bollywood Parks Dubai at Dubai Parks and Resorts after he was one of 10 lucky employees of EFS Facilities Services Group who won the Fam-Jam Award to bring their families on a five-day trip to Dubai as part of the group’s sixth annual staff appreciation day, called EFS Carnival. In total 4,000 blue collar workers from the company enjoyed a day out at the theme park on Friday.

“This year I am happier as I won the lottery to bring my wife here also,” said Mulla. “It’s a special day in our lives. That is why I have brought her dressed up like a bride,” he added.

Another winner, Lwang Abonge, a security guard from Cameroon, was able to bring his wife and brother to Dubai.

Various workers and their families were later honoured with Compassionate Awards in categories such as Super Spouse Award, Wonder Woman Award, Time to Give Back Award, Rightful and Deserving Award and the Unsung Heroes Award.

Love and care to build trust

All the winners of the Fam-Jam Award were treated with gifts and lunch with the group’s CEO Tariq Chauhan.

Addressing the technicians, housekeeping and security personnel, who form two-thirds of the employers of the company, Chauhan said, “Today is a day for me to remind you that we love you all. We love your families. And we care about you so much that we think in so many different ways about making you happy.”

He also announced a salary increase for those who completed three and five years, totaling some 3,800 workers, which was met with loud applauses and cheers.

Chauhan later told Gulf News: “This entire exercise is to build up strong trust in this level of workforce because blue-collar workers’ engagement always requires an innovative way. You cannot necessarily do that just with salary increases. We need to build a bigger platform for them.”

He said the company chose Bollywood Parks as the venue for this year’s celebrations because it won’t be affordable for most workers to visit the theme park, whose charges are about one third of their salaries.

Apart from other welfare initiatives, Chauhan said the company has a progression programme that identifies and promotes workers with more calibre in a short span of time.

One such employee was Mutesi Annet from Uganda who joined the company as a cleaner in 2017. She said she was surprised that she was promoted as an HR executive after two years.

Carnival helps workers unwind and spend a fun-filled day with colleagues from across the emirates and showcase their talents through various programmes, said Annet, who was also a member of the cheerleading squad.

However, it was not just all play. Videos reminding workers of the need to prioritise safety and enforce core values of the group were also screened. The celebrations that began with a parade of the workers, who hail from 35 nationalities, also marked the UAE’s Year of Tolerance with the theme ‘unity in diversity.’ The women’s focus group of EFS also formed a Pink Brigade to spread awareness about breast cancer.