4,000 workers in UAE display unity in diversity to celebrate Year of Tolerance 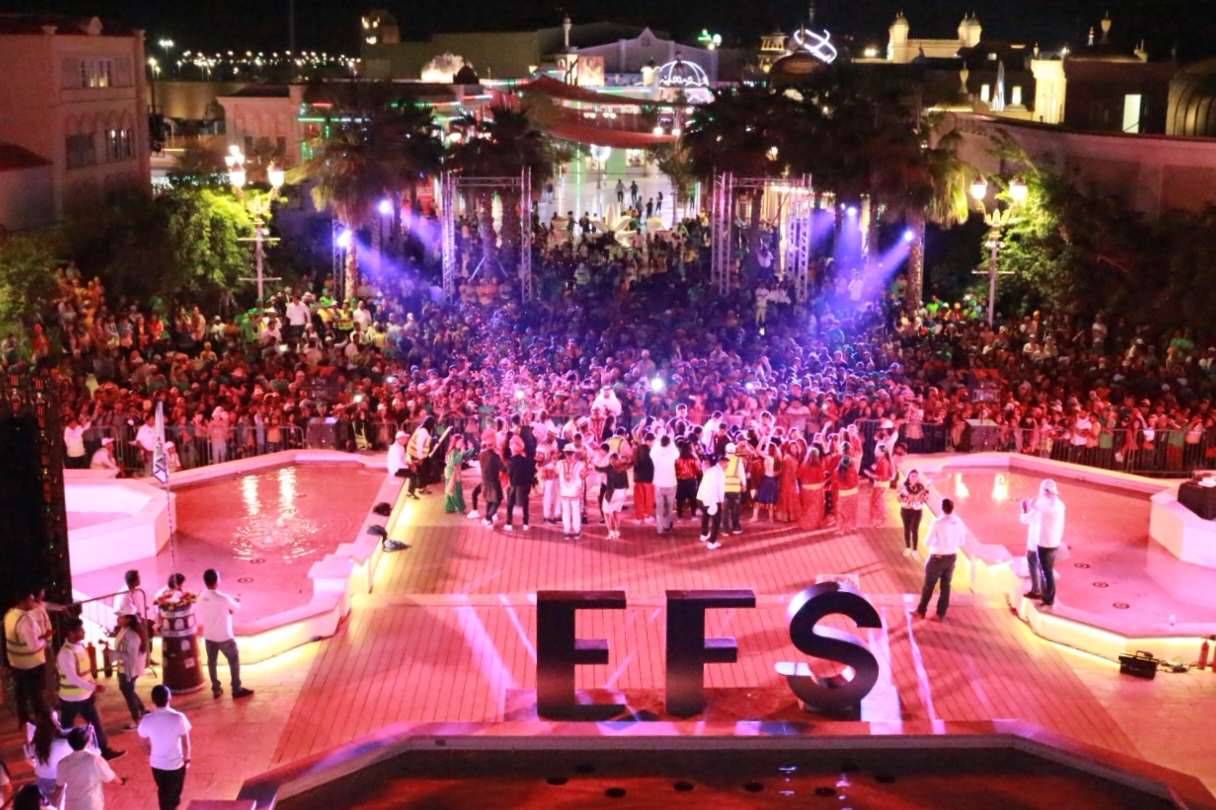 Dressed in colourful outfits, some of the workers performed on stage and others encouraged them as audience.

Around 4,000 blue-collar workers of 35 nationalities were given free access to Dubai’s Bollywood Parks where they not only watched shows and dined at restaurants together but also displayed ‘unity in diversity’ by performing traditional dances of their countries.

The full-day event – from 9am to 9pm – was organised by Dubai-based EFS Facilities Services to mark the Year of Tolerance by dedicating a day to the unsung heroes of the country. In order to give back to blue-collar community, EFS gave out gifts and cash prizes worth over half a million dirhams by designing some unique initiatives for talented and needy workers from across the UAE.

Dressed in colourful outfits, some of the workers performed on stage and others encouraged them as audience. A talented Ugandan cleaner, Mutesi Annet who is now promoted to become an HR executive for her hard work and capabilities, emceed a segment of the show like a pro, introducing and inviting fellow workers to perform on a huge stage set at the park.

Apart from offering workers free rides, entertainment and food, a lucky draw gave a chance to 10 workers for the fam-jam award that gave them a chance to bring their families on a five-day fully paid vacation to Dubai as part of the group’s sixth annual workers’ appreciation carnival.

Other awards included Super Spouse Award that aimed at recognising husbands or wives of blue-collar workers who have supported their partners’ dreams and at the same time managed household responsibilities back home and Wonder Woman Award that recognised blue-collar women workers who have left their young ones (kids under 5 years of age) back home. The award gives these mothers an opportunity to go to their hometown on a two-month holiday as a paid leave with free air tickets. The Time to Give Back Award recognised workers with aged parents who are 70 years and above old, so as to cater to their medical and financial care while the Rightful and Deserving Award was given to workers genuinely in dire need of educational aid for their children or medical aid for an ailing family member.

All the awards came with a good prize money and were presented by EFS group CEO Tariq Chauhan who said he believed in ‘people first philosophy’.

Blue-collar worker Mohammad Ihsan ul Haq has two determined kids who can neither talk nor walk. He was given the Super Spouse Award that came with an award money of Dh5,000. An emotional Haq said that although his wife is single-handedly managing responsibilities of the house and his bedridden kids in his home-country, she never complains and always supports him. “Thanks to my wife, I won this prize money that is very crucial for us as the financial situation at home is not great and my kids need regular treatment, which is expensive.”

Chauhan, who sat with the workers and had lunch, said: “Carnival is a day to salute these unsung heroes, our blue-collar workforce. They lend their sweat and unwavering commitment to the country delivering seamless and quality services. This day is dedicated to them to enjoy and take back memories of the day as one of their greatest lifetimes reminisces.”