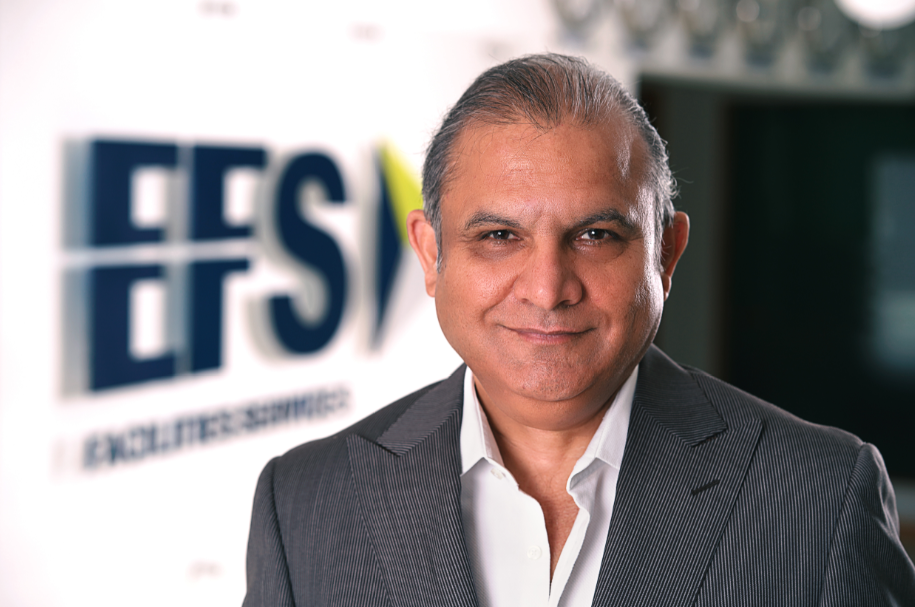 An accomplished business leader, Tariq is a Harvard alumnus. His career spans 33 years with multinational companies including Bank of Oman, Wall Street Group and KOL Corporation.

He has been with EFS for 11 years and has established EFS as a regional powerhouse and a premium FM brand. Since 2009, EFS has achieved sustained growth year-on-year supported by USD1.5 billion in contracts. During his tenure, EFS also prides itself by having an impressive rate of over 90% staff retention and 95% client retention employing over 18,000 people across the business, including India.

Tariq leads by example and is always setting the bar high for himself and his team. In 2019, Tariq introduced several initiatives such as social responsibility, HQSE internal campaigns, launches and pilot projects. EFS takes a proactive management approach for matters concerning HSQE and Worker Welfare wherein the leaders ‘Lead by Example’ by effectively defining, assigning, streamlining, and monitoring the initiatives through a structured engagement matrix which enables effective communication and performance management monitoring.

EFS believes in giving back to its employees, with emphasis on the blue collared workforce (70% of staff) through implementing the key pillars of giving back, introspection and self-actualization all levels.

The firm empowers its people through initiatives that make them feel aligned and involved. EFS leaders also provide support and sponsorship to contribute to the welfare of the society that supports the organisation’s CSR initiatives.

EFS’ Competency Modelling has become a mainstream practice as a part of the HR Management System. The company has transitioned from traditional job analysis to establishing a mature competency model that systematically analyses individual performance levels underpinning their personal attributes, knowledge, skills, and ability, which in turn helps the leadership team to identify performance gaps and recommend improvements that are likely to enhance performance thereby contributing towards higher quality and worker welfare.

Ethics and values are the common thread between Tariq, EFS and staff that forms the basis of the fundamental foundation of happiness and a high-performance organisation. He walks the talk and strengthen relations with his staff on ground through many opportunities.

Tariq is relentlessly working to build the case of upskilling the FM industry and raising the bar in built environments and workplaces. He has been supporting various impact organisations in the Middle East and India. He is also actively engaged with multiple social impact organisations and activists to build support and impact.