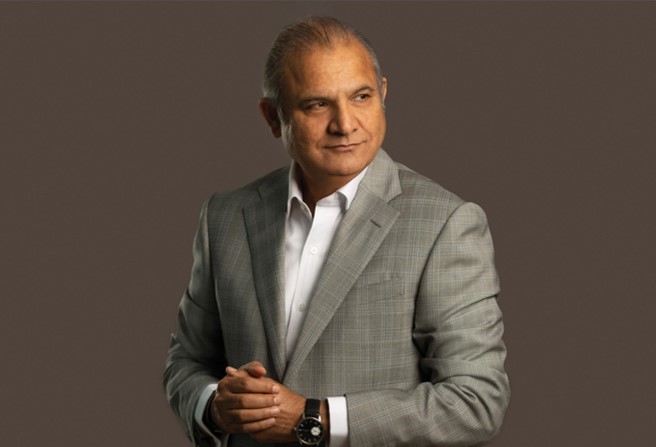 Dubai’s recently completed Expo 2020 offered over 24 million visitors an opportunity to experience an array of entertainment, architecture, and innovation.

But just as impressive as the show was the community of people working behind the scenes to keep the venues clean and safe for guests—an army of janitors, attendants, security guards, and beyond.

One company that provided several such services during the Expo, including housekeeping, technicians, and facade cleaners, was Dubai’s EFS. A key regional player in the facility management sector, EFS is one of those companies that helps keep business humming at offices, resorts, schools, factories, and more. “When I maintain a building for a client, I’m looking at the end-user ease in terms of a better quality of service,” says Tariq Chauhan, the long-time Group CEO of EFS. His company does everything from providing technical maintenance like plumbing and HVAC to delivering so-called soft services such as catering, landscaping, and security.

Taking on a contract for a generational event like the Expo is a sign of the times for EFS, which employs over 20,000 people and operates across the Middle East, Turkey, Africa, and South Asia. The group reports that it generated roughly $270 million in revenue in 2021. When Chauhan became CEO in 2010, EFS was a small player with $180 million in contracts, but today the CEO says that the group has a contract backlog of $1.3 billion and over 600 clients. That includes over 200 multinationals and many regional governments. And EFS has continued adding to that roster in 2022, announcing a new soft services contract for Saudi’s Jeddah Airport, valued at over $200 million.

The company’s rise has played out alongside the evolution of facility management in the Middle East. Although mature in markets like the U.S. and Europe, the industry has taken longer to develop in the Middle East. But the opportunity is clear enough, with recent decades featuring plenty of construction and infrastructure projects in the region and many countries embarking on economic diversification plans, which has created more facilities to manage. “What excites me is to see the market size, the growth potential that this region represents,” says Chauhan.

Of course, EFS isn’t the only facility management company targeting the regional market. The U.A.E. alone has many players, with some examples including Transguard Group, Emrill, Imdaad, Farnek Services, and Al Shirawi FM. Global giants also have regional footprints, such as France’s Sodexo, U.S.- based CBRE, and the U.K.’s Compass Group. For his part, Chauhan pushes off the topic. “I won’t talk about competition because this market is growing so fast,” he says. “Everyone has a room in it.”

Broadly speaking, many industries need facility management services, from retail and hospitality to manufacturing. Facility management can represent 10-25% of total indirect spending for companies. The global market for in-house and outsourced facilities management is estimated to reach $1.9 trillion by 2024, according to McKinsey.

Across the regions that EFS covers, Chauhan sees an industry worth over $200 billion and openings for new business. “Two-thirds of that is still in a very unorganized fashion,” he says, while pointing to sustainability and cost pressures as driving demand for the services that EFS can provide—particularly around bundling those together. “Finally, people realize that there’s a need for integrated facility management services,” says Chauhan. That means companies are looking to adopt multiple services simultaneously rather than select ones from different providers.

Chauhan claims that EFS has experienced a compound annual growth rate of around 20% since 2010 (meanwhile, the sector’s corresponding rate in the GCC is forecast to be 8.6% between 2021 to 2026, according to Mordor Intelligence). Going forward, the CEO has set lofty future targets: in the next five to 10 years, he hopes to grow revenues to surpass $3 billion annually, a sizable step forward.

Meanwhile, the market for facilities management (FM) in the GCC is forecasted to have a 7% compounded annual growth rate in coming years and be worth $15 billion by 2026, according to consultancy Frost & Sullivan. “sector’s “there’s “Sustainability and digitalization are two of the most significant forces that will reshape this market over the decade, requiring a scale-up of capabilities in the short term,” says Abhay Bhargava, a VP and regional practice leader covering energy and environment for Frost & Sullivan.

The market has also featured turbulence in recent years, with the onset of the Covid19 pandemic causing problems. Clients suspending services and lost revenues put the business under pressure, says EFS’s Group CFO Taher Jhanjharya, but he reports that Chauhan took proactive measures to support customers looking to reduce costs while also working to retain its own workforce. That helped EFS continue delivering services. “As a result, we ended the year with better financial results despite the challenges and a strong partnership with all stakeholders,” says Jhanjharya. Ultimately, the pandemic appears to be creating some upside for workplace management solutions too, as Covid-19 has led to new hygiene standards and demand for cleaning services.

The group claims that a large part of its success stems from its ability to retain clients. It has a contract retention rate of 97%, and Chauhan says that, on average, clients have stayed with EFS for about eight years. Keeping clients is obviously important, but Chauhan also touts that an essential part of the puzzle is mastering the art of managing people. Hiring and training large numbers of blue-collar workers is key to operations. But, going forward, effectively managing its workforce also means supporting its human resources with the right technology.

Globally, facility management is ripe for disruption, according to McKinsey. Although technology is available, industry adoption has been hindered by a lack of digital skills, leadership priorities, and a focus on continuous cost-cutting. EFS is concentrating on its software platform for integrated facility management. But it’s also introducing new tech in different areas, such as using Internet of Things tools like ammonia sensors in smart bathrooms. In the coming years, EFS plans to offer most clients live monitoring tools via Zoom, giving them virtual access to their facilities.

Another element of expansion for EFS is acquisitions. In 2021 it snapped up Guardian, a U.A.E. company offering fire protection systems and services, like sprinklers and alarms, and Chauhan says EFS intends to make other acquisitions to help increase turnover. Such moves would help gain business advantages, even if Chauhan doesn’t want to well on competitors. More than the competition, the CEO says it’s about ramping up to meet a “quantum leap” that he believes is coming for the industry.

Facility management wasn’t always Chauhan’s domain. He studied economics in India and got his start in 1987 as a manager with the Bank of Oman. From there came various international banking roles, and in 1995 he landed in Dubai to serve as CEO of Elfina Banking & Investments, a brokerage and advisory firm. By the early 2000s, he was running KOL Corporation, an IT company providing software solutions for enterprises. But the 2008 global financial crisis then upended his career.

A chance encounter with the chairman of EFS led him to take a role with the company in 2009. The origins of EFS trace to 2000, when it was established as a dedicated facility management services division in the U.A.E. by the U.S. construction services company EMCOR. In 2006, EFS was incorporated as a company providing regional services in partnership with EMCOR U.K.

In facility management Chauhan saw an intriguing opportunity. The early 2000s featured a significant uptick in built environments across the Middle East, but the facility management sector was nascent. At the time, EFS had a footprint and resources in the Middle East but only a handful of contracts. Chauhan believed the company had the right positioning to expand, despite being undervalued and undercapitalized. Within six months of joining, he became CEO. There were plenty of challenges to contend with, notably market conditions that increased pressure to cut costs. “The economy did not behave the way we all envisaged post-2008,” he says.

Over the first two years, he worked to stabilize the business before pushing it to expand and diversify. “We were able to basically bring down the cost of business development,” says Chauhan, who looked to develop and retain a workforce with the right skills while also focusing on winning and keeping clients. He also reorganized the business to pool together and share common resources across different service areas. “In [the facility management] business, your margins are limited as customers don’t allow for overheads to be part of your cost recovery,” says CFO Jhanjharya, who’s been with EFS for over 12 years. “The common pool helped the business take advantage of economies of scale.”

In particular, EFS targeted growth with multinationals, such as winning a contract with Citibank in 2011. It also quickly expanded its footprint, which in 2012 saw it establish a presence across 65 cities in India. During this time, Chauhan also dealt with personal challenges—he was diagnosed with cancer in 2013, but was lucky enough to recover.

That scare didn’t” impede his plans. By 2014, EFS had launched new operations ranging from Morocco to Pakistan and many countries in-between. It also diversified, such as introducing a new security service in 2015. That year, EFS recorded a contract backlog of over $800 million. The coming years brought notable business, such as a five-year contract with Etihad Airways worth $38 million in 2018. A year later, it inked an agreement to provide services for the upcoming Expo.

Simultaneously, EFS continued rolling out initiatives around workforce development. Recently, that has included EFS partnering in 2020 with Dawamee, a U.A.E. employment initiative by the Emirates Foundation to provide work opportunities for Emiratis. So far, EFS has hired 52 U.A.E. nationals through the partnership for a variety of part-time, temporary and remote work roles, according to Dawamee Program Manager Jamal Ali Khater. “This made EFS one of the most prominent companies that are continuing to support the Dawamee program,” says Ali Khater. In 2021, EFS also linked up with Sharjah’s Skyline University College to offer scholarships, incubation programs, and internships. Ultimately, career development efforts within the group have resulted in about 500 entry-level staff rising to become supervisors and managers.

Today, EFS has come a long way from serving a few regional clients, but the CEO who facilitated that rise still sees a company that never lost focus on its original foundations. “We never reinvented ourselves,” says Chauhan. “We kept reinforcing ourselves.”